What is a Projector?

Ⅰ. What is a Projector?

A projector is an electronic device that can display images or videos on a screen. Through various interfaces, it may be connected to PCs, VCDs, DVDs, BDs, gaming consoles, DVs, and other devices to play video signals. Similar to a slide projector, the projector is primarily made up of an optical system, ventilation equipment, and circuits, but it also employs the principle of convex lens imaging to create the projection. In today's world, projectors are commonly utilized in homes, offices, schools, and entertainment venues. There are various sorts based on different working technologies, such as CRT, LCD, and DLP.

Ⅱ. How does a Projector Work?

The projector's principle is inextricably linked to its structure, thus we'll go over it in detail alongside the projector's construction.

A condenser, an auxiliary condenser, a threaded lens, and glass make up the projector's condenser system. The Fresnel lens, commonly known as a threaded lens, is made out of two thin flat plexiglass plates with concentric circular threads carved on them. It can be used as a large-diameter convex lens because of its enormous diameter, lightweight, and strong light transmission. However, it can only function at temperatures below 70°C. When the temperature rises over this point, the projector will distort and its life will be cut short. The auxiliary condenser or crescent lens, which is situated between the light source and the condenser, helps to cool the Fresnel lens surface. The object-glass is mounted on a threaded lens that can not only display but also write the projection film and be utilized as a demonstration of experiments or instructional aids.

The projector also contains some significant electrical and ventilation equipment, such as transformers and fans. The transformer's job is to convert 220 V AC voltage from the mains into 24 V AC voltage for projection light bulbs. The most common projection bulbs are 24 V/300 W bromine tungsten lamps. The temperature inside the machine rises during operation, necessitating the use of a squirrel-cage fan to lower the temperature and remove the considerable quantity of heat generated during the projection lamp's operation. So that the threaded lens and electrical components are not damaged.

Ⅲ. How to Use a Projector?

1. Place the projector 1.5 to 2 meters away from the screen, turn off all switches, and then turn on the power;

2. Gently open the mirror cover to the maximum angle;

3. Switch on the power switch. The light bulb should turn on and the fan should rotate in typical circumstances.

4. Adjust the reflector, focus knob, and color edge adjustment knob until the screen has a clear white bright surface;

5. Turn off the projector after each usage, and don't leave it on standby for too long.

Ⅳ. How to Connect a Projector?

1. How to connect iPhone to a projector 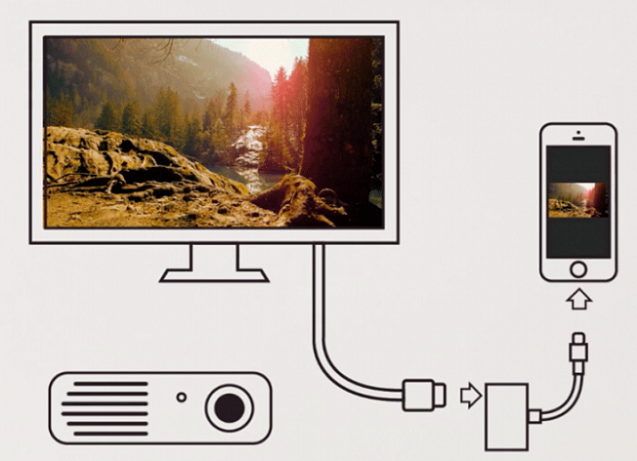 Connect a Projector to iPhone

Prepare the necessary items, including the projector, iPhone, VGA cable, and VGA to Apple interface adaptor.

Connect one end of the VGA cable to the projector's input port. The input interface is written with the logo, while the projector interface usually has a logo.

Connect the VGA to the apple interface adapter to the other end of the VGA cable and plug it indirectly.

2. How to connect a projector to a laptop?

Connect a Projector to a Laptop

Then, using the right-click menu, select "screen resolution options," and then "connect to the projector."

Then we went into the appropriate setup options. What we need to remember is that we can utilize shortcut keys to operate. For example, press the Microsoft logo key and the P key to rapidly turn on the projector's essential settings.

If we choose "Computer Only," no image will be displayed on the projector, and the computer will not output images to the projector; if we choose "Projector Only," the computer will switch off image output on its own monitor, which can help save energy in some instances. When it comes to copying, the resolution display output on the projector and the computer are identical; however, there is an additional function that allows us to place the picture output on one monitor on two monitors, or on these two monitors separately. We must adjust ourselves according to actual needs for various resolution modifications.

In most cases, we use a projector to exhibit PowerPoint presentations or video documents. Different display modifications in the screen resolution can be made for specific settings. Here you may find information about how to put up your own show.

Ⅴ. Summary of Common Faults in the Use of Projectors

1. Phenomenon: The projector does not respond after turning on the power and pushing the power button on the remote control.

2. Phenomenon: The brightness is normal after the power is turned on, but the image cannot be displayed.

Troubleshooting method: verify that all signal wires are properly connected, and that connecting plugs are not loose or have poor contact; develop the proper operating habit of turning on the projector first, then the computer; verify that the notebook computer's external video interface function is turned on. For IBM laptops, for example, press the F7 key while pressing the FN key on the laptop keyboard to switch between three display modes: Displays on a laptop screen, a projector screen, and two screens.

Solution: The screen adjustment function settings in the projector's main menu have been manipulated intentionally. Adjust the projector with the remote control; it should be suspended or perpendicular to the screen. Pay attention to whether the body is loose or skewed if it has been positioned for a long period. The fuselage must be repositioned if this is not the case.

Solution: In the projector's settings menu, the focus adjustment has been artificially altered and readjusted. Pay attention to the right distance between the projector and the screen when using it temporarily. Adjust the focus to make the text picture clear after the distance has been determined; the projector lens has been affected by dust. Long-term use of the lens cover, especially for hung projectors, will cause dust to build and thicken, affecting the visual impression. You can carefully wipe with a clean soft cloth, lens cleaning paper, or special suede if the projector lamp's life has ended or the LCD has failed. The board is beginning to show its age. Reduced brightness and clarity are common symptoms of this phenomenon, which occurs on machines that have been installed for a long time and are often used. The projector bulb has a lifespan of 2000-4000 hours. When replacing the bulb, it is advisable to use the original spare. If you need to replace it, it's advisable to take out the old bulb and replace it; the LCD panel can only be replaced when it's worn out.

6. Phenomenon: On the screen, horizontal or vertical scrolling stripes appear.

Solution: Look around for signal clutter interference, such as too close fluorescent bulbs, electric fans, air conditioners, even cars, lightning, and so on. Occasionally cause interference with the computer or projector; the signal connecting line from the computer to the projector Similar failures can be caused by poor quality, loose plugs on both ends, and unsoldering of pins in the plugs. The computer case is charged as a result of part of the desktop computer power supply failure, such as the output voltage of the switching power supply; the desktop computer display card failure, inappropriate display attribute settings; The projector's input power voltage is unstable (too high or too low), the power plug wire is broken, the ground and neutral wires are short-circuited, and so on.

7. Phenomenon: The image on the screen is either too big or too little.

8. Phenomenon: On the screen, stains emerge

Solution: Check if the projector lens is clogged with dust or paper dust; the projector's LCD has burned out. If the color spot isn't too noticeable, you can keep using it; otherwise, mail it back to the manufacturer for a replacement. Normally, use the remote control to turn off the television. Wait a few minutes for the projector to cool down once the bulb has been extinguished before turning off the power. To turn off the electricity, do not push the main power switch. It is simple to burn the LCD panel due to a high temperature.

9. Phenomenon: After a period of use, the computer suddenly shuts down.

Solution: If it's an accident, make sure the power plug isn't accidentally touched, as this can cause a power outage; if it's not, the projector will automatically turn on the overheat prevention function. The protection will be engaged automatically if the projector's heat dissipation is poor (dust collects in the air inlet and exit, and the sponge filter hasn't been cleaned in a long time) or the heat dissipation function fails, causing the temperature to rise too high. Turn off the projector, disconnect the power, and wait for it to cool before turning it back on. That's quite typical.

Always charge the battery to 100%? Stop it!
Things You Need to Know about Seven-segment Display